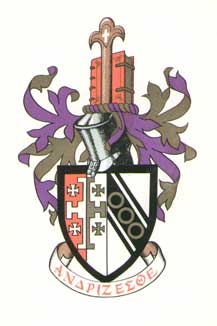 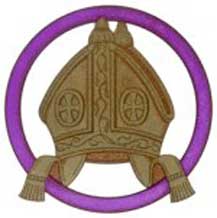 The choice of the unauthorised Arms which have hitherto been used by the College, must have been an early decision of those responsible for our foundation, since the Arms appear above the main gateway which was built in 1881, and on the Common Seal, first used in 1882.

The Arms are believed to be those borne by George Augustus Selwyn as Bishop of Lichfield, which were, following the usual custom, the Arms of the See impaling those of the Bishop's family. This was a very natural choice, but the Arms were never officially granted by the College of Arms.

The second Bursar, A.P. Humphry, was evidently conscious of this and in 1898 an Armorial Bearings Fund was started with contributions of five pounds from the Combination Room Plate Fund and from Humphry himself. This money was carried forward each year in the books of the College until the mid-thirties, when it was submerged in the general funds. The 1963/1964 Calendar recorded a very generous augmentation of the fund by a member of the College, which enabled us to begin the official process by sending a memorial to the Earl Marshal requesting his warrant to the Kings of Arms.

At the Visitations of Gloucestershire in 1623 and in 1682-1683 pedigrees and Arms were recorded for the family of Selwyn of Matesdon and of Stonehouse in that county; subsequently the pedigree of this family was brought up to date and it includes George Augustus Selwyn and his descendants. The pedigree and Arms of Selwyn of Friston in Sussex were recorded at the Visitations of Sussex in 1634 and 1662; the Arms were "Argent on a Bend cotised sable three Annulets or within a Bordure engrailed gules". These are the Arms which were used by Bishop Selwyn, with the addition of a crescent gules as a mark of cadency to indicate that he or his branch of the family were descended from a second son. The correct Arms of the Gloucestershire family are "Argent on a Bend cotised sable three Annulets or", so the College of Arms have omitted the "Bordure engrailed gules" and the crescent gules from the Arms now granted to us.

The Arms of the See of Lichfield were incorrectly blazoned in the dexter half of our original Arms. In these, and in several other representations of the Lichfield Arms, the colours are "counterchanged". In other words the half of the large "cross potent" and the two "crosses patee" to the dexter are argent on a gules field, and the colours are reversed in the other half – gules on an argent field. It was established some years ago by a member of the College and confirmed by the College of Arms, that in the correct blazon of the Lichfield Arms, the half of the cross potent and the two crosses patee to the sinister should be or and not gules. This is most unusual because it offends what is normally one of the basic rules of the heraldry; a metal (gold) should not be charged on a metal (silver).

It is believed that these Arms are related to the ancient Arms of the Kingdom of Jerusalem, a gold cross potent between four gold crosses crosslet on a silver field. The connection between the diocese and the Kingdom or Jerusalem is supposed to have arisen through Roger de Clinton, Bishop of Lichfield (1129-1148), who took the cross in 1147 and died at Antioch in 1148.

The correct blazon of the Arms is as follows:

Per pale Gules and Argent a Cross potent quadrate Argent and Or between four crosses paty those to the dexter Argent those to the sinister Or For the See of Lichfield inpaling Argent on a Bend cotised Sable three Annulets Or for Selwyn all within a Bordure Sable And for Crest On a Wreath Or & Purpure In front of a Book erect bound Gules edged clasped and garnished Or a representation of the Pastoral Staff of Bishop Selwyn.

The bordure sable was introduced by the College of Arms as a "difference", and the resulting Arms are bold and striking in appearance. The representation of the Pastoral Staff of Bishop Selwyn which appears in the Crest is based on his original hardwood staff of Maori workmanship, which is now in the Upper Chapel. The motto, which may be translated as "quit ye like men", is the last part of the inscription over the College gate, a quotation from 1 Corinthians 16.

On the reverse of the colour print of the Arms is the Device or Badge granted by the College of Arms, which may be used much more freely than the Arms themselves, and is described in the Letters Patent as "A Mitre Or within an Annulet Purpure".