The Gardens - Past, Present and Future

The Gardens - Past, Present and Future

Selwyn’s gardens are amongst the most attractive in Cambridge. Our spacious site means there is plenty of space for students and visitors to enjoy the grounds; and they stretch from the beautiful Victorian Border to a woodland walk and pond teeming with wildlife. Past gardeners have contributed in their own way to harmonise the garden with the imposing main building that Sir Arthur Blomfield designed. 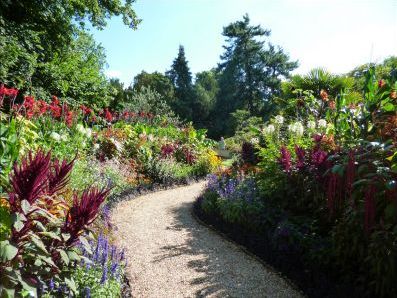 Blomfield intended that the lawn be at the same level with the building. However, expediency prevailed and for 80 years Old Court had a sunken lawn just like its sister college, Keble, in Oxford. In 1961 the sunken lawn was levelled with topsoil from nearby land owned by Gonville and Caius College. Many at the time saw this act of levelling the lawn as an act of vandalism, but on a practical level it is a lot easier to maintain and it does make for a more harmonious vista.

Selwyn College was built on a typical fen landscape of ridge and furrow water meadows, hedgerows and footpaths in the shade of huge elm trees, one of which still stands at the front of the College in the library car park. There are, in fact, a number of old trees in the grounds that date back to the 19th century, such as some magnificent old horse chestnuts, cedars, pines and a grand specimen of Holm Oak, an evergreen oak that stands proudly at the back of the lower lawn, not that far from the pond which was installed in 1998 – a much more recent feature.

During World War 2 the RAF occupied alternate staircases for cadet training, and cadets were drilled on the paths of Old Court. Graduates of the 1940s recall that the lower lawn was put over to vegetables and that one of the local coal tip reserves was sitting on the lawn somewhere in the Fellows' Garden. Also the nearby gardeners' 'Bothy' was used as target practice by a German plane; the marks were still visible until it was renovated in 1996. The attack so damaged the paths that the government asphalted them for us. At this time the Porters' Lodge was equipped as an air-raid warden's post, and the siren for west Cambridge was on top of the tower. Over the next fifty years the garden recovered from this onslaught and turned into what you can see today.

The Present and The Future

Spotlight on the Gardens Department, by Paul Gallant:

I've been Head Gardener at Selwyn for twelve years and my current team (Sam, Paul and Laurie) has been together for nine years.

After a few years of tidying up and removing dead trees, a lot of pruning, and with a kind donation of a second-hand greenhouse to replace the bubble wrap and wood greenhouse, and a new top on the existing greenhouse, we now have a good infrastructure to store and propagate new plants. This has helped me to add to the inherited Salvia collection. I have implemented a regime that has the greenhouse empty in the summer, so I can spend more time in the garden.

The next project was Phase 1 of Ann's Court in 2005. This needed some attention, and the new build gave us the opportunity to do exactly that, with a new tree planting plan, new shrubs, bulbs and new layout for the grass areas.

Four years later came Phase 2 of Ann's Court, and the plants and trees that had been planted as a temporary measure had to be relocated around the College, along with the plants from the existing gardens. Then the whole area had to be planted up in the format you see today.

In 2007 we had to do major work on the pond, as it had been leaking the previous summer. The nearby roses were removed, and three tonnes of sand was put in the middle of the pond because it was too deep. A felt liner was put in before the butyl rubber lining was put on top. Now the pond was contained, as before it just merged in to the garden border at the back of the pond and that was another way the pond was losing water. We have planted marginal plants in four tonnes of small, medium and large pebbles.

Next was the Fellows' Garden. We fenced it off to isolate it from the garden yard, and put in an arched walkway entrance. Evergreen climbers were put on the maintenance building, and the herbaceous border was split up and reestablished. Another kind donation of the summer house to replace the old one that was falling down, has made an eyecatching feature, and it is more practical at the far end of the Fellows' Garden near the faculty buildings.

My next venture is to design and implement new borders around Cripps Court. The large border near M staircase will be put back to narrow borders and therefore follow the cloisters. Most of the planting will be shrubs, with softer plants on the front.

There are also plans to plant more trees in the middle of Cripps Court, to deter ball games, so it looks as if we will have plenty to do this year and in the future