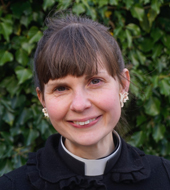 Arabella is a priest in the Church of England. After early years in Cambridge and Charlottesville, Virginia, she studied English and French followed by Medieval Studies at New College, Oxford. This was followed by a PhD in Medieval Literature and an MPhil in Theology from Emmanuel College, Cambridge. Arabella worked as a parish priest in Louth and its surrounding villages on the edge of the Lincolnshire Wolds before coming to Selwyn in 2022. She is married to a priest, Jim, who is currently fully occupied looking after her two children, Aubrey (7) and Ivor (1), their cat and two bantam hens. As Dean of Chapel, Arabella has oversight of all services and events in Chapel, and as Chaplain is a pastoral support to the whole College community. She endeavours always to have an open door, ear, or at the very least email inbox for you! 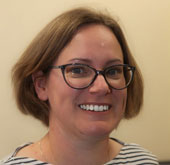 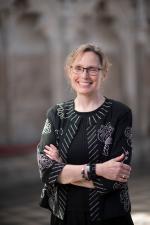 Sarah came to the UK from her native Canada in 1992 as Organ Scholar of Robinson College, Cambridge, after studying at the Royal Conservatory of Music in Toronto with Leon Fleisher, Marek Jablonski, and John Tuttle.  At Cambridge she studied the organ with David Sanger. She has been at Selwyn since 1999, and is the first woman to hold such a post in an Oxbridge Chapel. Sarah has made over 35 commercial recordings, variously in the guises of pianist, organist, conductor, and producer; she is a winner of the Royal College of Organists (RCO) Limpus Prize. Sarah has taught organ and conducting for Rodolfus Choral Courses, Oundle for Organists, the Jennifer Bate Organ Academy, and courses run by the RCO, and she has directed the annual Girl Chorister Course at St Thomas’ Church Fifth Avenue, in New York City and well as other residential choral courses in the States. She is a Fellow and Examiner of the RCO and a sought-after Fugue supervisor. She is also well-known as a composer, with over 50 published titles, and her liturgical music is performed worldwide. She is also Director of Ely Cathedral's Girl Choristers and Organist to the University of Cambridge.

Caille first came to Selwyn in 2001 where she completed both an MPhil (2002) and PGCE (2004) in History. Moving on to the glorious world of Secondary School teaching, she taught at the Parkside Federation in Cambridge until 2008. She then realised that music performance and organisation (something she always pursued) were more in line with her vision of the future. An active choral singer and soloist in both Cambridgeshire and Suffolk, she regularly sings with Cantilena Singers, directs the Lanwades Hall Players, and is a regular principal with the Swaffham Bulbeck Summer Theatre. She can be found in the choir music office three or four mornings a week. 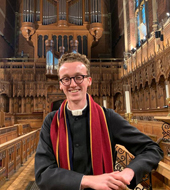 Adam is in his second year reading for a degree in Music. He accompanies the choir in its three weekly services, and assisting the Director of Music in the running of the choir. Alongside this, he is the Junior Secretary of the College Music Society, organising its weekly Sunday evening concert series and Thursday lunchtime organ recital series. Before a gap year as Organ Scholar of Portsmouth Cathedral, Adam studied for his A-levels at Whitgift School as sixth form organ scholar at Croydon Minster. His teachers have included Ronny Krippner and Stephen Farr. When not on the organ bench, he enjoys singing, the sacred polyphony of William Byrd, and playing the horn. Adam is a prize-winning Associate of the Royal College of Organists.