The organs and organ scholarships

(on the Létourneau: “a triumphantly successful organ to enrich a beautiful chapel” – Organists’ Review) 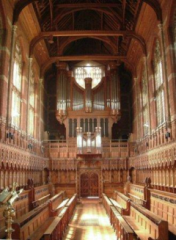 The main, west end organ has 30 stops and mechanical action over three manuals and pedals. It was built by Orgues Létourneau Lte in 2004, and inaugurated by Naji Hakim in January 2005.It is a magnificent instrument, much in demand for recitals and teaching by organisations throughout the UK.The specification can be found here. There is also a beautiful, brand new three-stop (8-4-2) Kenneth Tickell chamber organ at the east end, which was donated by a Selwyn alumnus, and inaugurated in November 2010.

Selwyn is expecting to appoint its next Organ Scholar for entry in October 2022. Application forms will be available online, and the deadline for application is 1 September 2021.

There are normally two Organ Scholars in residence, a Junior and a Senior, and their duties involve playing for all Chapel Services, both choral and non-choral.

There is a Sunday morning Eucharist in the Chapel for which the Organ Scholars play hymns and voluntaries, and Organ Scholars are paid extra fees for weddings and funerals during term and during vacations. The Chapel Choir’s accompanied repertoire includes the mainstream Cathedral and Collegiate repertoire, and plenty of less well-known music. Organ Voluntaries are required before and after each service (although often Preludes on Tuesdays and Thursdays are improvised). The choir is conducted by the Director of Music, who also carries out all administration, allowing the Organ Scholars time to develop solo repertoire (and to work towards their degree!). The Organ Scholars rehearse and conduct the choir when the Director of Music is away, and also from time to time when she is not away, which gives an opportunity for training in choral conducting and rehearsal techniques, as well as in choral accompaniment skills. Organ Scholars can learn orchestral conducting skills in the Music Society’s termly orchestral concerts, which on occasion involve the Music Society Chorus as well.

The Organ Scholars are paid a stipend of £450 per year, and receive a generous subsidy towards organ lessons which can be taken with any of Cambridge’s visiting teachers, all of whom are well-known recitalists (recent organ scholars have studied with William Whitehead, Gordon Stewart, and Stephen Farr). The subsidy can also be used towards lessons on other instruments, singing lessons, conducting lessons, and Alexander Technique lessons, if desired. Both Organ Scholars are provided with a piano in their rooms. Information about life as an Organ Scholar at Selwyn is perhaps best obtained from the current Organ Scholars. They are happy to be contacted by any interested candidates, as is the Director of Music in Chapel. Contact information can be found on the People in Chapel page.